As a nonprofit, you likely have many questions about how to properly set up a network for your office and team. What considerations should you keep in mind as you set up your office network? What components do you need? 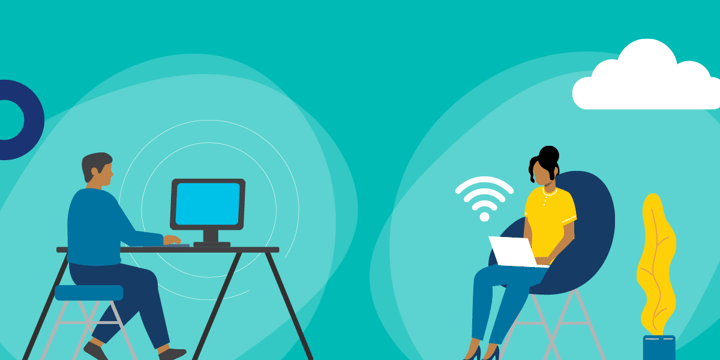 Let's begin with the long view. What is a network?

You can think of a network as a connection between two or more points. For our purposes, let's take a look at your computer network, or data network. In essence, you're probably looking for a way to connect all of the computers in your small office, to bring them together into a unified network. Establishing such a connection allows your team to more efficiently share information and processing resources, making for a stronger, faster, more cohesive team.

For example, without a network, each computer would need to plug into its own printer, drastically increasing the hardware costs for your office. However, with a network switch, multiple computers on the same network can share a single printer, significantly consolidating the hardware requirements for your team.

While you're perhaps familiar with your home network, usually a wireless network built around a router that allows your family's computers and devices to connect over the Internet, we are instead looking at a business network, which uses switches, routers, and wireless access points.

The foundation of networking centers around three key pieces of hardware: switches, routers, and wireless access points. It is through this hardware that your network-connected devices are able to communicate both with each other and with other networks. Let's begin with switches and routers. These are the most essential pieces of equipment you will need for your small office network.

Switches are the heart of your network. You can think of a switch as a controller that connects computers, printers, and servers into a network within a building or on a campus. It is like the bridge linking all of your office's connected devices. A switch establishes a network of shared resources, allowing your devices to communicate with each other as well as with other networks. A small office network simply isn't possible without first establishing a switch to bring your devices together.

There are three types of switches to choose from: unmanaged, managed on-premises, and cloud-managed.

Unmanaged network switches are simple and easy to set up, though they offer the least amount of flexibility. An unmanaged switch is ideal for an office network seeking basic connectivity with low complexity. You just plug in and get started, no configuration required. Unmanaged switches are generally used in home networks or whenever additional ports are needed, such as at desks, in computer labs, or in conference rooms.

Managed switches require a bit more IT expertise, but they can offer you greater security, features, and flexibility. Managed switches allow you to configure the setup to best customize your network. With the ability to configure and monitor your local area network (LAN), you will have tighter control over your network traffic and ensure its security.

If your organization plans to establish a larger network, you may incorporate multiple switches in order to sync together differing groups of computer systems. Your switches will connect to a router, which allows connected devices to access the internet.

A router can even prioritize some computers on your network over others. Some additional security features that may come with your router include firewall protection, a virtual private network (VPN), and an Internet Protocol (IP) communications system.

A wireless access point allows devices to connect to your network without cables. By creating a wireless network out of your existing wired network, you can open the door to wireless devices for your organization.

In addition to extending your network's Wi-Fi capabilities, an access point reveals handy information about your network's devices, offers proactive security, and more.

Scale as You Grow

As you navigate the range of options available for setting up your office's network, keep in mind the initial scale and intentions of your organization while keeping an eye to its growth. Which switches, routers, and wireless access points you install should sustain the day-to-day functions of your office, but you should also design your network to grow over time.

You want a network that can keep pace with and scale with the growth of your organization. Consider opting for business-grade switches and routers to ensure reliability. Stay aware of new features, such as video surveillance, integrated messaging, wireless applications, and Voice over IP (VoIP), and incorporate new functionality as you need it.

You should also consider creating and sustaining an up-to-date network diagram — a graphic representation of your network. It allows you to see all of your key IT devices at a glance and how they are connected and protected. This could serve as a valuable tool for troubleshooting, if the need arises.

The purpose of a network system is to bring together team members as a way to efficiently share resources in service of your organization's mission. Ask yourself how you can best advance that mission by building out the right network for your team.