If people live in a big city, they likely use or know about apps that tell them all about local transit options. But what about the billions of transit users worldwide who don't have access to transit schedule data? Why don't they have access, and what can be done about it?

Caravan Studios, a division of TechSoup, has been experimenting with one way to solve this problem.

Globally, Most Transit Riders Don't Know When Their Bus Is Coming

As part of our Made at the Library project, library users created paper prototypes of apps that would solve local problems. Participants in two smaller cities voted overwhelmingly for a technology solution that provides access to either real-time or schedule transit data. Their comments included, "I would love this app, because we don't know the schedules," and "Very cool, since I will no longer have to go to the bus stop to see the bus schedule!" (You can read more about the Made at the Library project on Medium.)

Although it was clear that community members wanted — and needed — an app to help them find their bus, it wasn't clear why they didn't already have access to one. For transit apps to work, the underlying data must be organized in a specific format; the most used of these formats is called General Transit Feed Specification, or GTFS. While working with volunteers to organize Farroupilha's GTFS feed, we became curious about how many other cities were in the same situation. Were all of those small cities like Farroupilha (population approximately 70,000)?

What we learned was that online transit data definitely is missing for many small cities. But it's also missing for big cities like Belém, a touristic city touted as the gateway to the Amazon (population 1.4 million), or Guatemala City (population 994,000). Although these big cities can generally be considered outliers in Latin America, research completed by Caravan Studios intern Jaewan Park showed that access drops sharply as city size decreases.

And counting only those data sources that are open or free for multiple platforms and apps to use, only 12 percent of municipalities have mobile transit data. In a vast and urbanized country like Brazil, the majority of cities house a large portion of the country's population who are left out of the benefits of mobile transit data.

Why Isn't Transit Data Accessible? What Can Be Done About It? 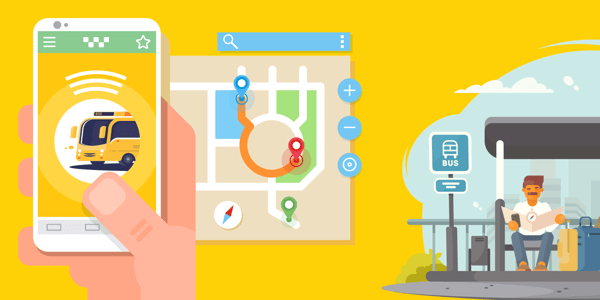 As in Brazil, capital cities and bigger cities are much more likely to have transit data available than provincial capitals or even edge cities that border bigger or capital cities. However, our research also shows that several Latin American countries lack any sort of scheduled transit data in an online format. These countries include Uruguay, Guatemala, Honduras, and the Dominican Republic.

Could Your City Benefit from Transit Mapping?

Back in Farroupilha, 20 volunteers from a local high school used GPS devices to map their city's bus system. As a result, Farroupilha is now the first city in Brazil to be visible in the Transit app. Because of Google's submission standards, the local government adopted the student-prepared dataset as its official dataset, and it has been submitted to Google Maps for inclusion in the platform.

The mapping project has proven to be well suited to create partnerships with academic environments like high schools or universities. It can provide interesting, dynamic content for students interested in technology, open data, and helping their community.

Building on the success of the Farroupilha mapping project, Caravan Studios is seeking to replicate this project in other areas, particularly in Latin America. If you live in a city that could benefit from a transit mapping project, or would like more information, please contact us at feitonabiblioteca [at] caravanstudios [dot] org.

Are you interested in learning more or supporting this project?

Fill out the form on this page and we'll contact you as soon as possible.

As always, we are still learning, so we welcome your thoughts and questions. For more information on this project, you can also read our post on Medium.

Ricky Abisla is portfolio manager, Americas, at Caravan Studios, a division of TechSoup. Contact him at rabisla [at] caravanstudios [dot] org.