Why Hotspots Are Red-Hot Tech These Days

It was in March 2020 when the pandemic hit hard and everything started to close down, including schools across the country. Schools having to hold virtual classes exposed a massive digital divide across the country. In 2019, the FCC reported that 21.3 million Americans (or 6.5 percent of the population) lacked access to broadband Internet. Microsoft estimated that the digital divide was much worse than that. By April, teachers at schools across the United States reported that fewer than half of their students were regularly participating in online classes. There was clearly not nearly enough home broadband to go around. Enter mobile hotspots.

Building broadband infrastructure is very expensive and takes a long time to develop. There have been Internet deserts in large parts of rural America and also our cities for a long time. There has been a growing movement among libraries and nonprofits since 2012 to "loan out the Internet" using mobile hotspots. Hotspots are small devices that provide Wi-Fi broadband Internet connectivity for multiple computers or Wi-Fi-enabled smartphones and tablets. Hotspots are usually the size of a pack of cards and are super easy to use. 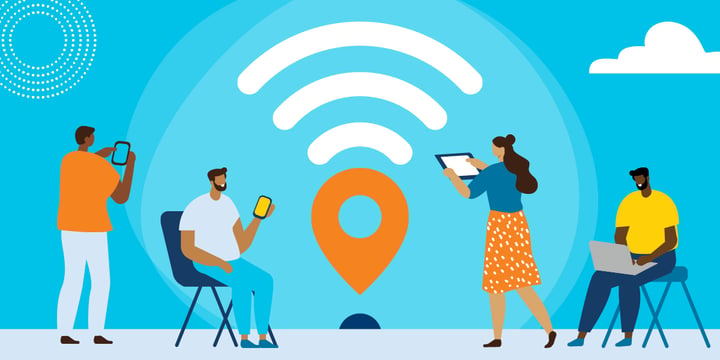 Hotspots to the Rescue

Thousands of libraries including those in Houston, Los Angeles, New York, and Chicago have been using them to loan out the Internet to patrons. All they need is a library card. Hotspots are affordable enough for the smallest rural libraries to circulate them to patrons.

David LaCrone, digital branch manager at The Kansas City Public Library, says: "Unlimited data from Mobile Beacon is a game changer for the Library's hotspot lending partnership with the public school district. It sends the message that we value, trust, and support the often-vulnerable families we serve."

Others have recently joined the movement as well. School districts that serve vulnerable and disabled students in 26 states will receive free Wi-Fi hotspots from AT&T and the nonprofit Connected Nation. Connected Nation is a national nonprofit that provides communities with broadband technology and support.

While loaning out the Internet to address the digital divide is the main use for mobile hotspots, there has been some exceptional innovation in their use. Here are some examples.

Not the Whole Solution, but a Piece of the Puzzle

While TechSoup is proud to be involved in supplying very-low-cost mobile broadband via hotspots to charities and libraries, the digital divide in the country is massive. To bring broadband to the estimated 157 million people in the U.S. who do not have it yet in their homes will be a challenge to all of us — government, business, schools, libraries, and nonprofits. It will require significant policy changes like the current Emergency Broadband Benefit Program.

However, we have to admire the great emergency work during this pandemic that libraries, schools, and nonprofits have done to use what tools we have — like hotspots — to address the problem. It is impressive work!

Do you know of a school that needs hotspots? The Mobile Beacon Connect for Success grants are available to schools in eligible cities that are interested in starting a mobile learning lab, a program to help close the homework gap, or a program to aid in professional development for teachers. Applications are accepted on an ongoing basis.