Editor's note: this article is reprinted by permission of BroadbandSearch. It originally appeared as 51 Critical Cyberbullying Statistics for 2020 here.

Bullying has been a part of life since people first started living in sedentary communities. For some reason, people have always found it comforting to put other people down, even if the comments they make are mean and hurtful. This can help explain why, in 2020, cyberbullying is worse than ever.

However, the emergence of and universal adoption of social media has opened the door for a new type of bullying: cyberbullying.

StopBullying.gov defines cyberbullying as bullying that takes place over digital devices such as cellphones, computers, and tablets. It includes, but is not limited to, SMS and text messages, social media, forums, online gaming, and any other app that allows people to view, participate, and share content. The National Crime Prevention Center also has a good definition.

Cyberbullying is a real problem in today's society. Consider this: 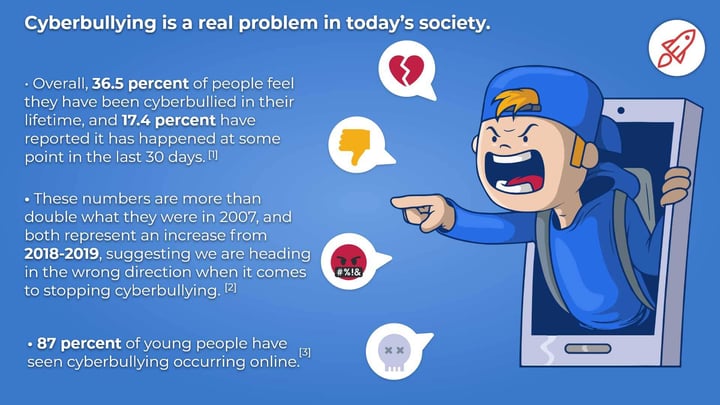 In some respects, this is good. It means more and more kids are gaining access to the knowledge and information available on the Internet. However, it also increases their exposure to potentially harmful interactions, specifically, cyberbullying.

A Rite of Passage?

In school, bullying has traditionally been seen as a part of life. Most people have always thought of bullying as nothing more than "kids being kids." However, this is quite simply not true. Instead, it's an excuse to ignore a real problem and to avoid trying to solve it.

In a survey conducted by Ditch the Label (PDF), over three-quarters of kids — 77 percent to be exact — said that bullying, and more specifically, cyberbullying, is not a part of growing up.

What's interesting is that it's not just children and teenagers who get cyberbullied. There is some evidence to suggest that cyberbullying also goes on amongst adults.

However, cyberbullying is often called something else when it's done to adults, such as harassment, or sometimes even stalking.

These numbers are troubling. They show that cyberbullying is not only pervasive but that it doesn't go away as we get older.

Cyberbullying Statistics Everyone Should Know

To get a little bit deeper into the problems cyberbullying causes, take a look at the following data provided by Ditch the Label (PDF), one of the world's leading anti-bullying organizations.

They asked students to indicate on which social media platforms they had experienced cyberbullying, and here are the results. 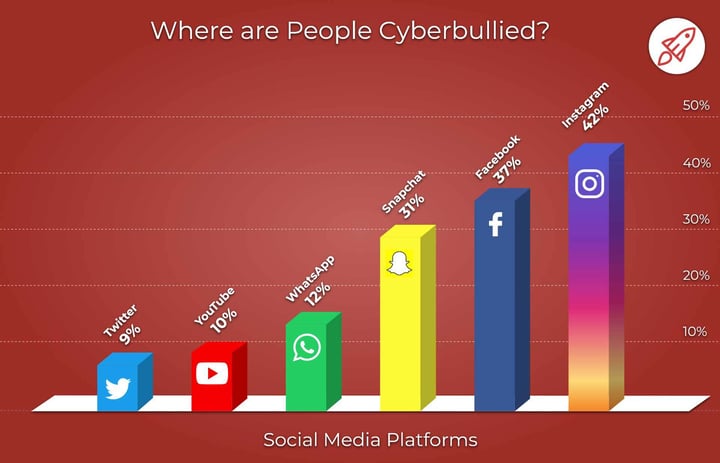 The study also revealed some surprising statistics about the number of people that are perpetrators of cyberbullying. For example, they found that

These statistics are troubling because it suggests a general misunderstanding of exactly what cyberbullying is. More specifically, it's likely these people who have admitted to doing something abusive towards others online actually engaged in cyberbullying, but because of a lack of awareness as to what this is, they do not admit it.

Girls and LGBTQ People as Targets

Over half of students who identify as being LGBTQ have experienced cyberbullying at some point.

Girls are more likely to be a victim of cyberbullying than boys. Overall, around 36 percent of girls have reported being cyberbullied, as compared to 26 percent of boys.

The Impacts of Cyberbullying

Even if you've been fortunate enough to escape cyberbullying, this doesn't mean you don't need to worry about it.

The effects of cyberbullying can have a tremendously negative impact on the mental health and well-being of victims. And these impacts are far more serious than just "feeling bad" about yourself. They go deeper and touch more sensitive parts of the human psyche.

These effects can be felt in both the short and long term, and they help point out why we should be taking cyberbullying so seriously. Here is a rundown of some of the more troubling statistics about the impact of cyberbullying.

How Bullies Are Rewarded

According to a study published in The Journal of Early Adolescence, cyberbullying can actually help improve a student's perceived popularity.

This suggests that we as a society encourage this type of behavior by rewarding those who engage in it with higher social standing.

In a recent Ditch the Label survey (PDF), students who had been cyberbullied were asked to identify what issues they felt arose because of their experience with cyberbullying. These were the results. 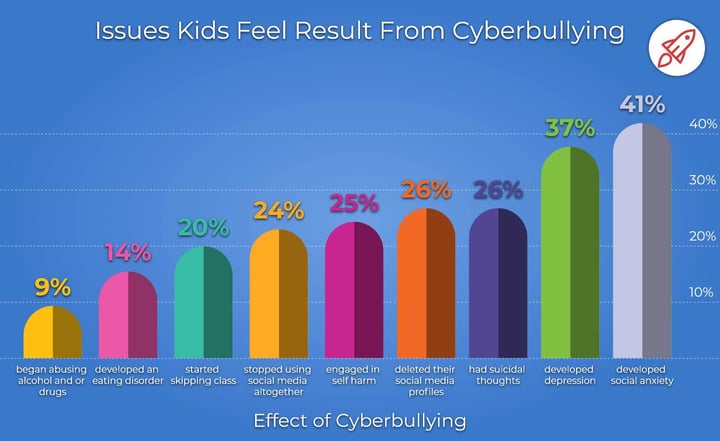 How Can You Tell If Someone Is Being Cyberbullied?

Knowing the detrimental effects of cyberbullying, and also that people who suffer from it are unlikely to say anything about it, it's critical that you know the signs someone is suffering so that you can step in and be the helping hand that they are often too shy or embarrassed to ask for.

There are several behavioral changes that someone being cyberbullied may undergo. For example, they may

On the other side of things, it's important to look out for some of the signs that someone is engaging in cyberbullying.

As shown by the statistics, more people engage in cyberbullying than you might think, and these numbers are based on those who admit it. It's quite possible there are more people than the research suggests.

If you see anyone exhibiting these types of behaviors, then consider investigating more and intervening where possible.

What Parents and Librarians Can Do

As of 2020, around 81 percent of kids think that bullying is easier to get away with online.

Ask your child to go over their list of contacts in their phone and instant messaging apps so that you can know more about the people with whom they communicate.

Talk to your young patrons about cyberbullying so that they know what it is and how to understand when it is happening.

As you can see, cyberbullying is a real issue that is prevalent all around the world, among both children and adults.

What People Being Bullied Can Do

Make sure kids know this by going over what they should be doing if they feel they are a victim. These are some things you can do if you feel you're being cyberbullied:

As you can see, cyberbullying is a real issue that is prevalent all around the world, amongst both children and adults. However, we are not helpless in trying to prevent this from happening.

There are things you can do to help stop harassment and abuse online and to help contribute to a society based on respect and compassion for all.

BroadbandSearch is a company whose goal is to make shopping for Internet providers easier for consumers by providing information on all available options. The company is not beholden to any single provider and therefore is dedicated to transparency and giving users unbiased information on all providers.

Social Media
How to Create Great Educational Content on TikTok