The Giving USA 2019 report by the Giving USA Foundation and the University of Indiana Lilly Family School of Philanthropy has just come out. The good news? American individuals, bequests, foundations and corporations gave $427 billion to U.S. charities in 2018, according to Giving USA 2019: The Annual Report on Philanthropy for the Year 2018. We Americans are very generous to our churches and charities. In good times, we give a bit over 2 percent of our national GDP to charities. The bad news? 2018 was a down year. Adjusted for inflation, total giving declined 1.7 percent.

Frankly, we have been expecting this news ever since the U.S. tax overhaul went into effect in early 2018. All is not lost, though. At TechSoup, we of course follow technology closely, and we have some ideas on how you can use digital fundraising techniques and tools to thrive in recessionary philanthropic times.

In early 2018, the new U.S. tax overhaul, officially called the Tax Cuts and Jobs Act, went into effect. The stock market decline in late 2018 during the end-of-year giving season may have also had a dampening effect despite the fact that the overall U.S. economy was relatively strong in 2018. The Giving USA 2019 report says:

"One important shift in the 2018 giving landscape is the drop in the number of individuals and households who itemize various types of deductions on their tax returns. This shift came in response to the federal tax policy change that doubled the standard deduction. More than 45 million households itemized deductions in 2016. Numerous studies suggest that number may have dropped to approximately 16 to 20 million households in 2018, reducing an incentive for charitable giving. The full impact remains to be seen." 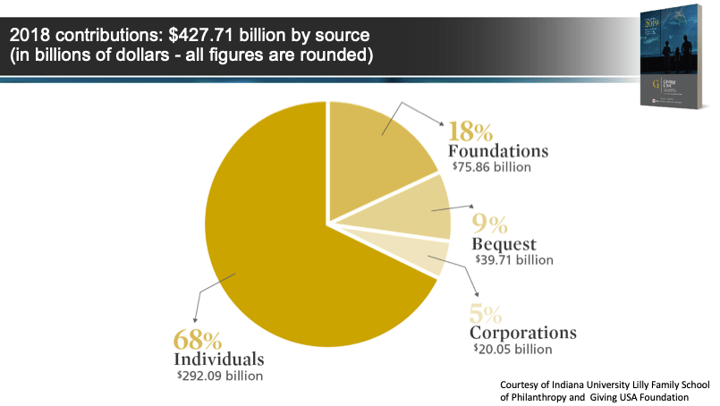 Foundations increased their grantmaking 1 percent in 2018, but between 2017 and 2018, inflation-adjusted giving to foundations declined 9.1 percent, which is a considerable drop. If this trend holds, there may well be a decrease in foundation giving in the near future. Family foundations still provide the bulk of foundation grants.

Corporations have been giving less to charities in the last few years. The cumulative change in inflation-adjusted giving by corporations between 2016 and 2018 is down 1.2 percent. Corporate giving has been steady at around 5 percent over the years. Corporate giving generally follows the trend of pretax profits, which fell 0.2 percent in 2018. 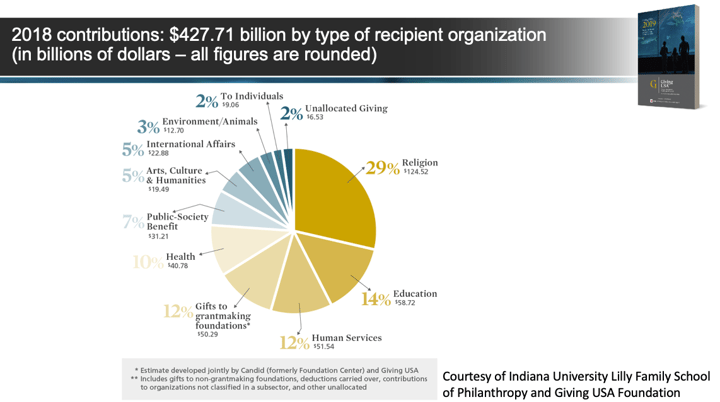 Decreases in giving in 2018 were borne by U.S. charities that have traditionally received the most donations. These include churches and religious organizations, education, human services, health, public-society benefit organizations, gifts to grantmaking foundations, and arts, culture, and humanities. Here are the 2018 drops in giving to these charities adjusted for inflation:

What Can You Do About This?

I had the opportunity about a year ago to look into this with the great fundraising expert Michael Stein. In our blog post, Charitable Giving Expected to Plunge: How Nonprofits Can Survive, we provided some practical tips that are still very relevant. Long story short, it's time to double down on digital fundraising. Here is what we recommend.

"Your charity may want to consider staffing up in critical areas of fundraising. Staffing up would be especially helpful in higher revenue opportunities. These options include growing mid-level giving programs, using wealth screening services to identify donation opportunities, investing in a higher performing donor management platform, and piloting ways to move donors up the ladder of engagement. Many of these options may require different staffing configurations or partnerships with agencies that can help charities achieve these goals."

Giving USA's practical advice is that "donors in the mid-range of a given organization's gift pyramid may be impacted the most by the Tax Cut and Jobs Act. Extending your relationship-building and prospect management system to donors below your current major gift level makes good sense in this changing environment."

TechSoup donor partner ClickTime has published an infographic based on information from the Giving USA report.

Event Planning
The Best of Both Worlds: Making Hybrid Events Work for Your Organization