How Tablets Can Make Computing More Accessible for Everyone

It's easy for many to think of digital accessibility features as sort of an add-on, a set of features that live off to the side, there for only a small group of people. But that isn't the case. According to the CDC, 61 million Americans — and roughly one in four adults — live with a disability of some sort.

It's clear, then, that digital accessibility benefits us all in some way. Our devices should reflect that reality.

Tablet computing is one of the most interesting corners of the tech world, and it's home to a rapidly developing ecosystem of features, apps, and tools that make computing more accessible to us all. 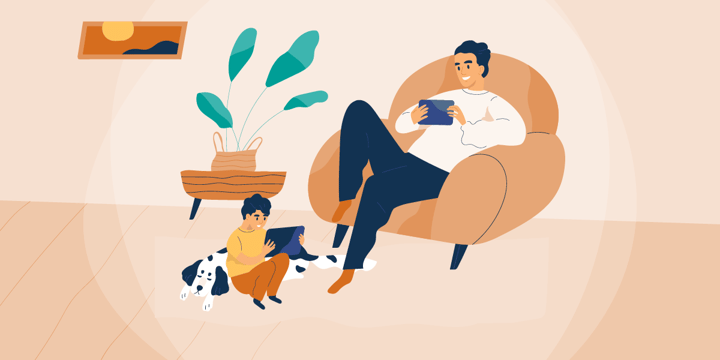 What Is a Tablet, Anyway?

For the sake of this blog post, we're focusing primarily on tablets built from the ground up with touch input in mind, like the iPad or the Samsung Galaxy Tab line. We are focusing primarily on these devices because they represent a significant shift in how you interact with them compared to a more traditional computer running Windows, macOS, or Linux.

We are focusing less on tablets that run Windows because, although Windows 10 contains numerous tablet-oriented features, these current devices are essentially full-fledged Windows PCs. They work in much the same way as a standard Windows PC does.

It's worth noting, though, that Microsoft has some intriguing upcoming tablets that are designed more heavily around touch. The upcoming Surface Duo line will ship with a new version of Windows known as Windows 10X. This version of Windows is more heavily centered around touch input, and when it comes out, we'll surely have more to say about Microsoft's tablet efforts.

In a video shown during the 2010 introduction of the iPad, Apple's Jony Ive said, "There's no up, there's no down, there's no right or wrong way of holding it. I don't have to change myself to fit the [iPad]; it fits me."

It may have been in the context of a marketing promo video, but as it turns out, the iPad's innate flexibility and adaptability is a boon for accessibility.

"The combination of the touch-based interaction plus iOS's accessibility features make it, in many respects, the most accessible computer Apple has ever made," Steven Aquino, a freelance tech journalist and podcaster who also has disabilities, told TechSoup. "Its flexible nature can make it anything that anyone needs it to be."

Shelly Brisbin, a writer and podcaster with low vision, agrees. "It has a profound portability and flexibility aspect," Brisbin says. "[I can] make it fit what I want, customized to the needs I have."

This flexibility and adaptability has made the iPad — and tablets like it — ideal devices for a range of uses related to accessibility. For example, Brisbin uses her iPad as a teleprompter. And Aquino highlights the Magnifier feature on iPhones and iPads, which he finds useful "to read price tags, restaurant menus, and other kinds of small-print items.

In fact, an entire cottage industry has sprung up around tablet accessibility.

An AAC app for a tablet can do all of that and more, depending on the app. For example, some will speak words and phrases that a person selects. Others have flexible vocabulary options so the app grows with a person as their needs and abilities change (for example, a young child who's learning new words).

This one's personal for me.

I have some issues with executive functioning. That is, I have a hard time managing time, planning tasks, and directing my attention. Sometimes, I can focus on something to the exclusion of just about everything else. Other times, I am very easily distracted. Needless to say, having a laptop in front of me during a meeting is a recipe for attention-span disaster.

Last year, I purchased an iPad Pro plus Apple Pencil stylus. I bought it mainly as a creative outlet — I really wanted to get into digital art. But in recent months, it's become an indispensable device for me in meetings — meetings in which I would often find myself lost in a fog of digital distraction, only slightly aware of the discussion taking place.

Instead of bringing my laptop with me, I will now often leave my laptop at my desk and bring my iPad with me. I'll use it as a digital notepad. I use OneNote, which, thanks to Office 365, syncs neatly with the version of OneNote installed on my laptop.

It allows me to stay more focused on the meeting: Since I'm taking notes, I'm more engaged with the conversation. And since OneNote takes up the entire screen, it pushes Internet distractions to the background, all while allowing me to hop online and look something up if I need to. It's really the best of both the analog and digital worlds.

But you don't need to have a disability to benefit from the tablet's inherent accessibility advantages.

Even the most user-friendly personal computer on the market can be cumbersome to use. My mom, for example, was never into computers. She found them confusing, perhaps a little intimidating. So beyond some computer literacy classes, she never really touched them.

But that all changed when my siblings and I bought her an iPad for Mother's Day one year. Within a day or two, she went from almost never touching a computer to emailing my sister, viewing photos of her grandchildren, watching TV shows through the ABC network's app, and playing games. And it was largely because the iPad significantly lowered the barrier to entry. If you could point and tap, you could use it.

Despite these inherent advantages, the modern tablet is a relatively new device compared to traditional computers like the Mac or Windows PCs. And so there are still some gaps in the accessibility ecosystem.

Both Aquino and Brisbin use their iPads as secondary devices. In Brisbin's case, the traditional personal computer offers a less cumbersome experience. "I like desktop operating systems because there are a lot less workarounds," she says.

Brisbin also points out that some accessibility devices don't yet fully support tablets. She also highlights the fact that it's unclear which third-party apps fully support built-in accessibility features on the iPad. And since there are no free trials for paid apps in Apple's App Store, you can end up paying for apps that aren't fully accessible.

To rectify this app issue, Brisbin suggests that app stores note whether or not an app supports certain accessibility features. "I believe in truth in labeling," she says.

In recent years, tech pundits have spilled forth countless words on whether the tablet represents the future of computing and whether it can replace a more traditional PC. The answer has largely been, in essence, "it depends." And that's largely true in terms of accessibility as well. The tablet has some clear benefits over traditional computers, but it also has some clear shortcomings and gaps that need to be filled.

But it's clear that accessibility on the tablet has tons of potential, and I'm excited to see what comes next.

Hardware
Reuse and Recycle Computers for Environmental and Social Impact

Hardware
Choosing the Right Computer for Your Organization

Hardware
Choosing a Printer for Your Small Office