Flags of Freedom: A Spotlight on Global LGBTQ History and Activism

At TechSoup, we are dedicated to serving diverse civil society organizations around the world. The month of October is recognized both as Global Diversity Awareness Month and as LGBT History Month. To celebrate, we want to spotlight two civil society organizations working towards awareness of LGBTQ history and inclusivity for LGBTQ people everywhere: the GLBT Historical Society and The Amsterdam Rainbow Dress Foundation. These organizations have a shared interest in documenting LGBTQ activism. While we're highlighting them specifically, we'd also like to celebrate the thousands of organizations around the world working to advance LGBTQ activism and document LGBTQ history.

A member of TechSoup for over 20 years, the GLBT Historical Society is a charity that "collects, preserves, exhibits and makes accessible to the public materials and knowledge to support and promote understanding of LGBTQ history, culture and arts in all their diversity." We're proud that over their tenure as TechSoup members, we've been able to assist the organization to procure a considerable number of software donations, allowing it to leverage donations and to focus revenue saved to execute its mission.

With a museum in San Francisco's Castro district, the Society provides a place for the exhibition of LGBTQ art and artifacts. The historical archive is the largest collection of LGBTQ materials in the world and includes a wealth of exhibits and academic resources relating to Gilbert Baker, the creator of the Rainbow Flag. Earlier this year, the Society received a donation of a piece of the original Rainbow Flag, first raised in 1978 during the San Francisco Gay Freedom Day Parade. This piece of the flag is "the only known surviving remnant of the two inaugural rainbow flags'' according to the Society. Its archiving in the museum is part of a broader 1978 Rainbow Flag History Project and the Society's dedication to the preservation of and education on LGBTQ+ history.

The Amsterdam Rainbow Dress Foundation, an NGO based in the Netherlands, has created "a work of art in the shape of a dress, with the aim of encouraging debate and awareness about inclusion and equal rights throughout the planet. It is a monumental dress with a diameter of over 16 mts. (52 ft.) comprised of the 71 flags of countries where homosexuality is punishable by law, including eight countries in which homosexual acts can result in the death penalty." 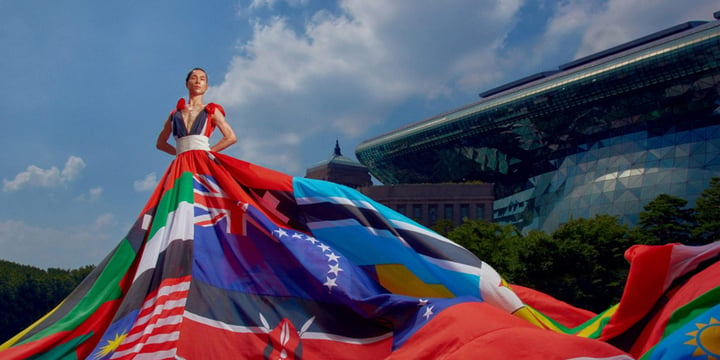 As countries discard their anti-LGBTQ laws, their flags are replaced with rainbow flags. The exhibitions of the dress raise awareness of anti-LGBT legislation globally and encourage involvement with LGBTQ+ rights causes. One day, the founders of the project hope to see the dress covered entirely with rainbow flags. TechSoup's own Jen Holmes (manager of office administration and event planning), brought the Amsterdam Rainbow Dress to San Francisco in 2018 for the Gay Pride VIP Party at City Hall in San Francisco.

If you're interested in learning more about these organizations, we encourage you to explore their sites this month. The GLBT History Society hosts many online exhibitions about LGBTQ+ history and an archive with research guides on LGBTQ+ topics. The Amsterdam Rainbow Dress Foundation has exhibited the dress across the globe and hosts photos and videos of the exhibitions online.

TechSoup is committed to the promotion of LGBTQ+ rights. Our membership includes organizations working on LGBTQ+ causes within the United States and internationally. The TechSoup Anti-Discrimination Policy, which applies to member organizations, affirms the rights of LGBTQ+ people and communities. As October is both Global Diversity Awareness Month and LGBT History month, we're invited to investigate how sexuality and gender play into global diversity. LGBTQ+ history is never one history; we invite you to seek out historical and activist LGBTQ+ organizations in your own community.