For nonprofits, it goes without saying that attracting new donors for your cause is one of the biggest challenges. Unless you reach the right people with your message, there's a good chance your fundraising appeal will fall on deaf ears.

Targeting the right people, however, can help you streamline the process significantly. Not only will it give your fundraising efforts a boost, but it'll also minimize wasted efforts. You can focus your efforts and resources to reach only those people who are highly likely to be on board. That's why you need audience intelligence tools to analyze your community and discover whom to target.

In this case study, we pull apart the valuable lessons from a recent social media campaign run by SMASH, where it used audience targeting to build awareness and raise funds. SMASH is a nonprofit dedicated to empowering students of color to pursue STEM careers by providing access to essential resources and social capital. It's also the educational arm of the Kapor Center.

What SMASH Wanted to Achieve

In the summer of 2020, SMASH wanted to take its fundraising efforts to the next level and started a six-week-long #SMASHmatch campaign with these goals:

In order for its campaign to be a success, SMASH had to overcome a few challenges:

How SMASH "Smashed" Its Campaign Goal

With a big target amount and a tight schedule, SMASH had to really ramp up its fundraising efforts to meet its campaign goal. It took a three-point approach:

Since SMASH's Twitter ad campaign was suspended, the organization couldn't target specific users through ads. So to address this problem, it turned to Audiense to identify its best outreach candidates.

Here's a detailed breakdown of what SMASH did and how it used the Audiense Insights platform to take its fundraising initiative to the next level.

1. Identify the Best Influencers for Its Cause

Since SMASH could no longer amplify its reach through paid ads, it had to find another option. This meant partnering with influencers. But not just any influencer would do: It needed people who were already engaged followers and had significant reach.

So it used the Audiense Insights platform to identify its most engaged followers who also had a "verified" status on Twitter. It sorted its follower list using parameters like reach and follower count. This allowed it to narrow down its search to find influential followers who matched its criteria.

As it no longer had to manually comb through a long list of followers, SMASH was able to streamline its efforts and instantly activate its campaign.

2. Use Direct Outreach for Visibility and Impact

With SMASH having such a big target to reach, it could not take the risk of putting out its campaign and hoping to convince the right donors. Instead, it took a more direct approach by personally tweeting to each of the followers it wanted to reach. It requested them to donate and retweet so the campaign could gain traction.

@sherylunderwood YOU can directly support students of color in becoming the leaders that tech needs! ❤️ Please RT to support @SMASHprogram! #SMASHMatch https://t.co/DXX27F4tmD

Although it initially intended to send out 100 tweets a day, the campaign picked up right from the start. On the first day alone, it had managed to secure $10,000 in donations and reached its original funder goal of $500,000 by the third.

3. Identify New Donors to Keep Up the Momentum

When SMASH realized that its initiative was a hit, it decided to ramp up the campaign by reaching out to new audiences.

It used the Audiense platform to discover relevant outreach prospects that were following other nonprofits and the Kapor Center.

Once it applied the same direct outreach approach with these new candidates, it received even more verified retweets. Support came pouring in from leading public figures such as actors, athletes, entertainers, and political commentators. 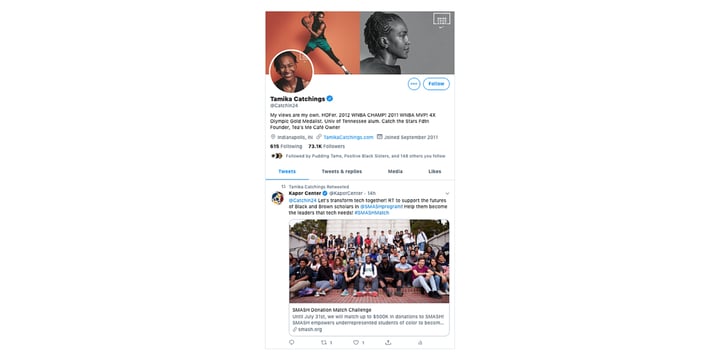 To deliver a bigger impact with your fundraising efforts, accurate audience targeting helps you focus your efforts on the most relevant donors. Combined with a creative outreach strategy, smarter analytics and targeting will get you closer to your fundraising goals.

Marketing and Communications
7 Strategic Ways to Improve Your Podcast