How to Multiply Your Nonprofit's Twitter Impressions with Automation

If you manage social media for a nonprofit, you might wear many hats and may not always have the time or budget to spend on expanding your following. Still, that doesn't mean you can't strategize for less. One way to better harness the power of social media is to optimize the way you use Twitter threads by automating your posting times to reach more of your audience.

Twitter threads are used to go further than the 280-character limit and connect multiple tweets together. Tweepsmap, an artificial-intelligence-driven marketing platform, discovered how to utilize Twitter threads to multiply impressions (views per tweet) at an astronomical rate. Now you can too. 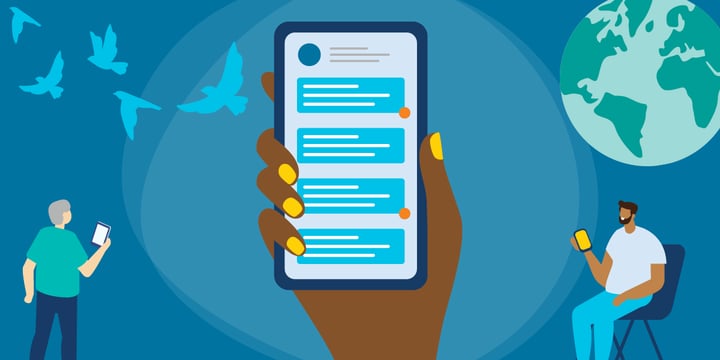 By automating threads with intelligent scheduling, you can boost impressions over 2,400 percent on Twitter and maximize your visibility without the stress, time, and energy it takes to increase your audience. We divided our audience to test the difference of engagement (replies, likes, and retweets) on individual tweets vs. posting in a thread. We then automated our thread so it wouldn't post all at once, allowing impressions to build over time while sharing helpful content that engages followers.

It's essential to make a thread about a topic that excites and motivates your audience, especially for a nonprofit organization that seeks to mobilize people to act. One way TechSoup shows you how to do this is driving social media engagement with impactful storytelling. Nonprofits can even create a thread to raise awareness, show their impact, share people's stories, and more. To learn more, see how TechSoup raised awareness for #NationalRescueDogDay.

Now let's take a look at our experiment to see how your nonprofit can multiply its Twitter impressions using automated Twitter threads.

How You Can Boost Tweet Views by Scheduling Threads

If you want to use this strategy, you should first think about what topics are appropriate and highly useful for your following. What would your audience find helpful?

For this example, tips about scheduling social media content were perfect for Tweepsmap's following on Twitter because we help people understand and grow their audiences. We used the hashtag #30DaysofScheduling to categorize our content. We also made the tweets engaging by including images or links to a blog where the tips are explained in more detail.

Here's a peek at the thread: 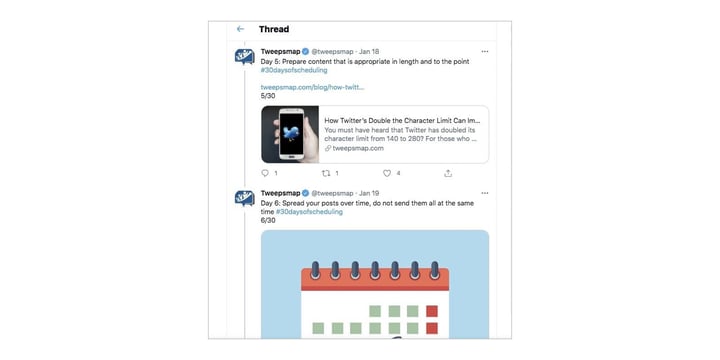 For nonprofits, there are many possible hashtags to use. Here are some examples:

You can even go further by picking a hashtag that your current audience already uses. If you need recommendations, there are tools online that help suggest hashtags based on what your audience talks about. Don't forget to make it your own — it's best for your thread to be noticeable within the hashtag you use.

Finally, we numbered our thread and posted tweets once a day over 30 days. Want to learn more about your audience before you begin? Check out TechSoup Canada's steps to create a social media audit.

If You're Not a Numbers Geek, You Can Skip This Section

The experiment received 1.4 million impressions (views per tweet) in total over the 30-day period, which averaged about 46,897 impressions per tweet. The first tweet in the thread received the most impressions by the end of the 30 days: around 455,000. Not counting the first tweet, the average impression rate for each tweet was about 31,730. Check it out: 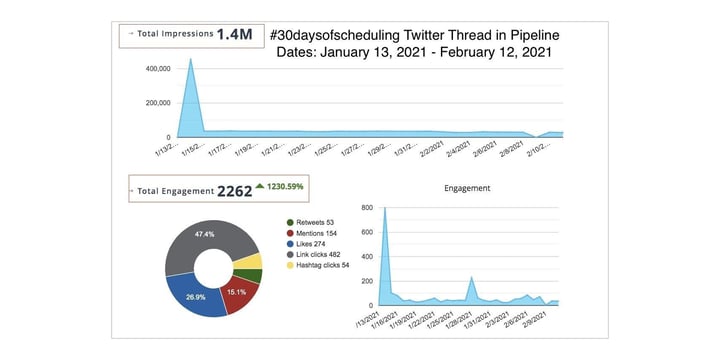 The #30DaysofScheduling pipeline received 2,262 engagements (comments, likes, and retweets) over the 30 days. This makes an average of 75.4 engagements per tweet, increasing about 160 percent, compared to posting individual tweets without a thread. Scheduling thread posts at optimal times was much more effective since threads not only take up more space on people's timelines, but they also amplify the message with previous tweets. See TechSoup's latest thread here, for example. Knowing the best times to tweet to your audience, combined with paced scheduling, gives you the opportunity to ensure that your message is heard and drives engagement throughout the entire thread over a long period of time.

Pressed for Time? Here Are the Facts.

Tweepsmap found a new way to multiply engagement on Twitter. Here's how you can tweak this strategy to perfection — even if your nonprofit lacks the time and big budget to reach many people through promoted tweets.

The results revealed that tweets with links create more clicks and lead to higher engagements, which multiplies your thread's visibility in the end. So, when you make posts of value or amplify someone's important message, include the website link because it will help your Twitter account convert more traffic to your campaign or donation page!

The most crucial part of this experiment was how vital the first post is for a thread. When people found the thread, they were encouraged to read all the tips ending in the first post, which was online for longer. For nonprofits, this means you could share a story or discussion that leads to the first post or provide knowledge that does the same. The goal is to attract users to read the entire thread after being hooked by any of the posts. We learned that the first post in a thread must be the most inviting to encourage users to visit a website or blog or take action because, eventually, most users will find their way to the first post.

If This Sounds Complicated, It's Pretty Simple: Schedule a Thread

Using a thread properly can increase engagement and impressions and reach audiences more effectively. Making sure that your content is posted when your followers are most active has proven to increase the effects of each post. Using Twitter threads alongside this strategy can multiply this activity more rapidly and with greater outreach — saving you time and money to devote to other efficiency goals.

Consistently sharing thread posts over a certain period when an audience is available allowed us to achieve a 2,417 percent increase of impressions and a 160 percent increase in engagements. To see our analysis in detail, please check out our case study.

If you want to save time, this strategy can be automated so you maximize your efforts. By using Twitter's features smartly with the help of automatic posting and analytics tools, you can exponentially increase audience engagements without a sweat. So next time you're planning to increase traffic to your donation page, you don't have to do it alone.

If you have any questions or want to learn more about how to optimize your social media with less effort, feel free to reach out to us or find us on Twitter @Tweepsmap.

Web Development
How Your Website Can Enhance Your Membership Program

Marketing and Communications
Use HubSpot to Improve Program and Services Operations

Marketing and Communications
Customize Your Nonprofit Marketing to Grow Your Donations