What's new in library tech! Welcome to our monthly collection of fun and hopefully useful news items from our great twitter feed and wherever else we find them. 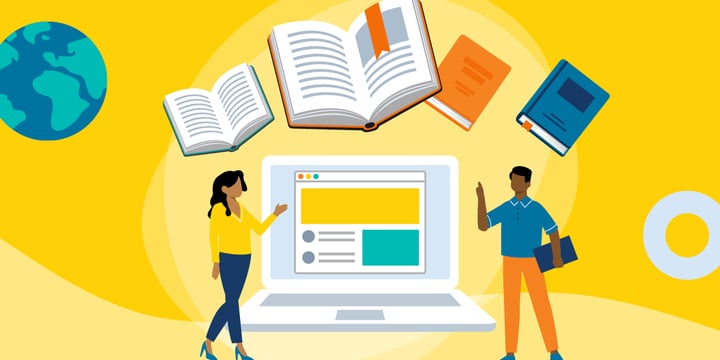 Happy new year 2021 and also It's OK to Be Different Month! This month we're covering big library tech news on the Build America's Libraries Act, Urban Library Council's Innovations winners, Amazon's new project with DPLA to license e-books to public libraries, and what your patrons are actually doing with your e-books and audiobooks. Here's our lineup this month.

The Build America's Libraries Act was introduced very late in the 116th Congress by Sen. Jack Reed, D-R.I. It would have provided $5 billion for capital improvement projects in libraries nationwide through the Institute of Museum and Library Services (IMLS). It had some heavy-hitter co-sponsors including Chuck Schumer, D-N.Y., and Vice President-elect Kamala Harris. Let's hope it is reintroduced in the new congress soon.

PC Sweeny of EveryLibrary.org recently posted an interesting piece on Medium about the various ways that libraries support the critical work of their local charities. Many, like the Central Library in Denver and the Carnegie Library of Pittsburgh, have dedicated nonprofit resource centers. Libraries all over the country are also bringing in health professionals and offering screenings and education to the community in partnership with nonprofit organizations focused on improving community and national health.

The Urban Library Council 10th annual Innovations winners for 2020 (PDF) have been announced. It's a stunning list of innovative work by libraries all over the country. It's definitely worth a look for ideas on new programming. I particularly recommend Newport News Public Library and their innovative mobile Wi-Fi hotspot program in locations around their city. They broadcast broadband in underserved parts of their city during critical hours. I also like Contra Costa County Library's extraordinary 3-D PPE printing program. That is definitely worth a look.

The 2020 Library Systems Report is out now. Library technology expert Marshall Breeding reports on American Libraries that there have been significant changes in the LMS field. Ex Libris is now a major technology player for both academic and public libraries.

The library technology industry has steadily consolidated over the last two decades, with the number of vendors narrowing at each round of acquisition. ProQuest's acquisition of Innovative Interfaces represents a seismic shift in the library technology industry. Ex Libris acquired the RapidILL service from Colorado State University, and BiblioCommons was acquired by Constellation Software this past year.

Marshall Breeding has a lot more to say in his long article about what's going on at Follett, EBSCO, Innovative Interfaces, and especially OCLC. Very interesting indeed.

The Hill recently reported that Amazon has been under pressure by librarians and advocacy groups to lift their ban on selling e-books published in-house to libraries as demand for digital content has spiked during the coronavirus pandemic. A bit later in December, Good e-Reader reported on some details for a solution. The Digital Public Library of America (DPLA) is in discussions with Amazon Publishing on an arrangement. Amazon said they will begin experimenting with different lending models in early 2021, so something definitive is expected sometime soon thereafter.

The potential agreement in its present scope only includes titles from Amazon Publishing (over one million digital titles), while those from Amazon KDP program or Amazon Audible have been kept out of it. The agreement envisages all of the Amazon titles to be available in the form of the ePub edition. DPLA and its partner libraries would be in charge of the titles, which would be accessible to the general public using the New York Public Library's e-reader app, SimplyE.

How Your Patrons Multitask While Reading E-Books and Audiobooks

TeleRead reports on new findings by the Panorama Project, a joint initiative of publishers on librarians, on how e-book users multitask while reading their books. What do they do most? Watch TV, talk with other people, exercise, do work or homework, take care of personal hygiene, and play games. People multitask with audiobooks even more. They mostly do chores, and — from my own extensive experience — sleep.

Adobe officially stopped supporting Flash on December 31, 2020. Flash is of course the multimedia software platform that was long used for production of animations and streaming of audio and video to make websites much more interactive and interesting. Content developers can use HTML5 or Adobe AIR to replace Flash. The Flash removal update for Windows 10 is available for all versions of Windows 10. This month Google Chrome will release Chrome 88, which completely removes Flash support and capability from the browser software. Adobe is urging people to uninstall Flash Player software from all Windows PCs. The death of Flash doesn't affect Macs or mobile devices. Starting January 12, 2021, Adobe will block all Flash content.

All over America, cities are rapidly changing. We often encounter blocks with new modern buildings squeezed in between old ornate structures. How much has changed in the last 200 years? Fast Company reports that a new Google open-source 3D map can show you a historically accurate representation of development in a town going all the way back to 1800.

Since we'll be wearing masks for the conceivable future, we might as well give them an upgrade, right? Reuters UK reports on a Japanese startup called Donut Robotics that has created something called a C-Face Smart Mask. In combination with a mobile app, the mask can connect to devices via Bluetooth, transcribe speech into text messages, make phone calls, amplify the wearer's voice, or translate from Japanese into eight other languages. It is expected to cost $40 per mask.